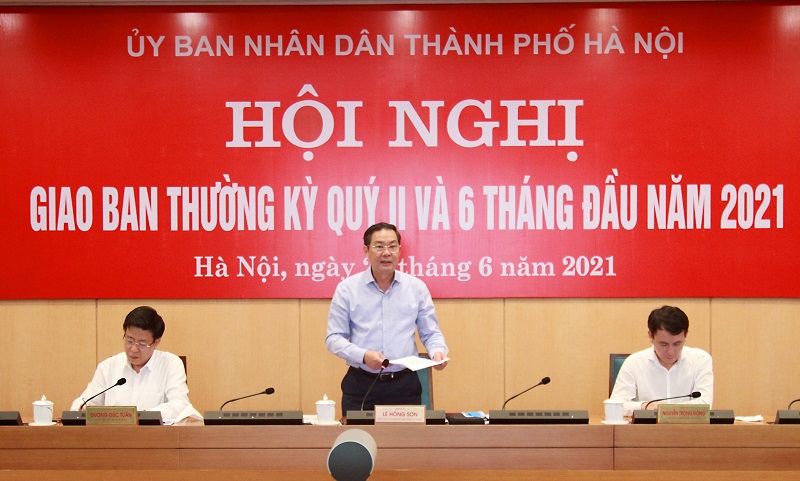 Hanoi’s gross regional domestic product growth in the first six months of 2021 was estimated at 5.91%, significantly higher than the 3.39% rate recorded in the same period of last year.

Director of the municipal Department of Planning and Investment Do Anh Tuan revealed the figures at a meeting held today [June 24].

“The result remained encouraging given the severe impacts from the Covid-19 pandemic,” Tuan said.

Tuan referred to other key results in the January-June period, including a 7.1% year-on-year increase in the state budget revenue at VND124.85 trillion (US$5.42 billion), and industrial production expanding by 8.7%.

On the contrary, transportation and tourism continued to be affected by the pandemic and its countermeasures. Foreign arrivals to Hanoi in the five-month period plunged by 85.5% year-on-year to 101,000 and the number of domestic tourists contracted 19% to 1,3 million. “The city is committed to further supporting businesses and investors from business registration to project implementation and subsequent phases,” Tuan stressed, adding the city remains in the top 10 among business-friendly localities, standing at 9th in the 2020 Provincial Competitiveness Index (PCI).

According to Tuan, for Hanoi to realize its growth target of 7.5% in 2021, the city must aim for economic growth of over 8.5% in the third- and over 9.1% in the fourth quarter, which is “a challenging task given the current pandemic situation.”

In the coming time, Hanoi is expected to continue pushing for economic recovery by reforming existing administrative procedures, improving the business/investment environment, and attracting investment capital for development, Tuan noted.

At the meeting, Vice Chairman of the Hanoi People’s Committee Le Hong Son urged local authorities to strive for the 7.5%-growth target, focusing on promoting potential fields such as manufacturing and processing and greater efficiency in budget management.

Given public investment as a key measure to boost economic growth, Son requested the city to disburse 60% of the planned investment amount in the third quarter, eventually reaching the 100% rate for the whole year.

“An acceleration of privatization of state-owned enterprises and supporting tourism firms in restructuring operations are also priorities for the local authorities,” added Son.